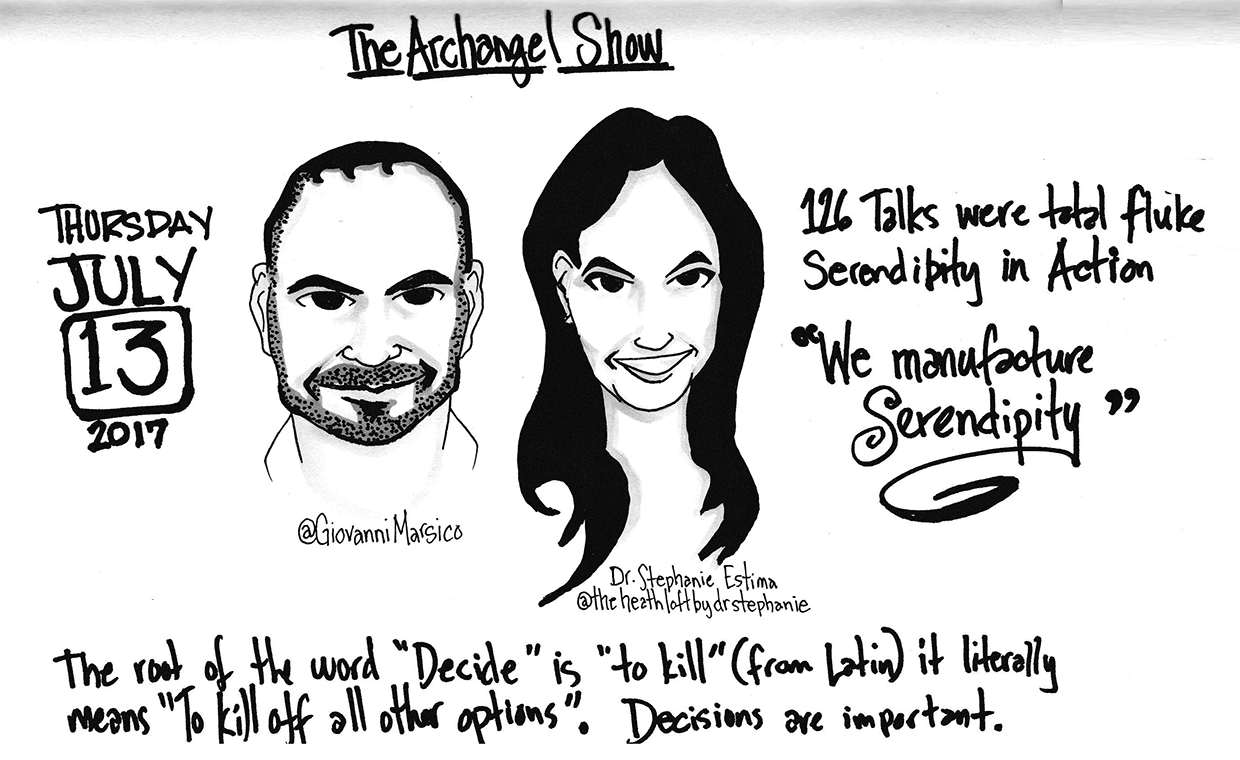 Giovanni and his partner Dr. Stephanie Estima hosted the event, introducing the show as the same type of conversations that they had with their friends at their dinner parties.  All of the guests were members of Archangel Masters – Archangel’s private mastermind group.

Just like the Archangel Summit, I decided to Sketchnote each guest’s most interesting information.  Each illustration can be clicked on and enlarged. 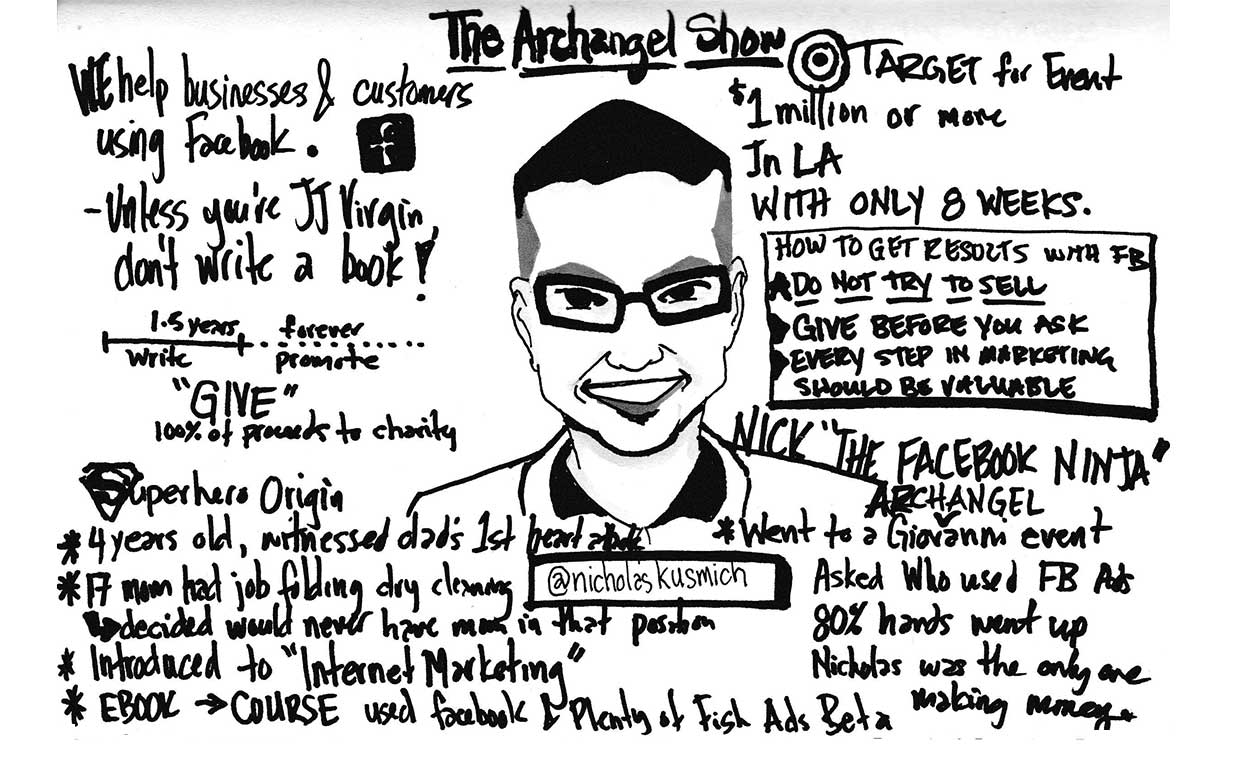 Nicholas Kusmich is considered “The Facebook Ninja”, and he started the show off with the first “Superhero Origin Story”. He created an ebook course and used Facebook ads to promote it. During an early event, Giovanni asked who had used Facebook ads. 80% of the hands in the audience went up. When he asked the follow up question, “Who has made money with Facebook ads?” Nicholas’ was the only hand that went up.

Today he is known as the foremost expert on Facebook ads.

He said to get results on Facebook you need to try not to sell, provide value at every step of the marketing process, and give before you ask. 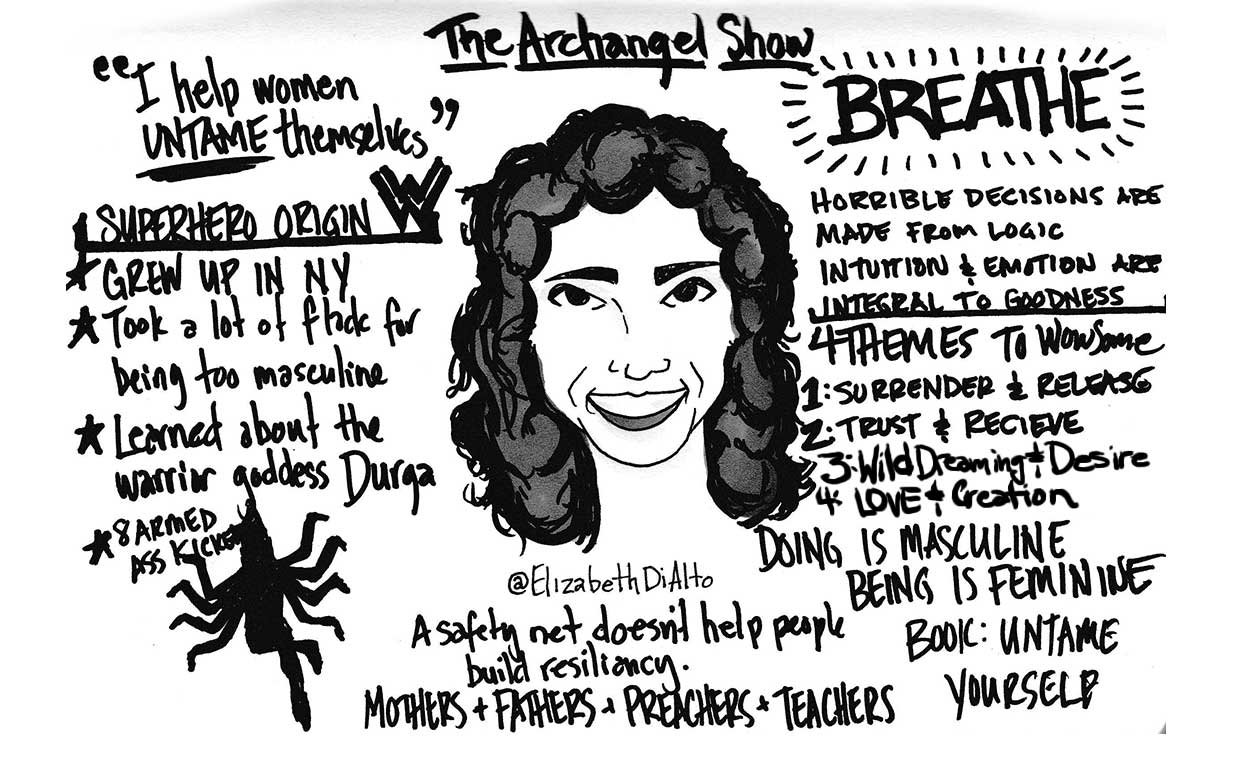 Elizabeth DiAlto told her superhero origin story, she grew up in New York, and took a lot of flack for being too masculine in her youth. She learned about the Hindu warrior goddess Durga, who she referred to as an “8 armed ass kicker”, and recognized her own power as a strength and not a weakness.

She then went on to recognize and celebrate the differences of being a woman.

More than any other talk, this one spoke to me for a number of reasons. I’m the dad of a daughter, and I’ve been a hiring manager who saw the entire dynamic of my teams positively change when I brought women on board.

One of the things that resonated most with me was how horrible decisions are based entirely on logic and reason, while empathy and emotion are the basis of good decisions.  In my business I often say that numbers only tell half the story, you need to dig into the “why” of what the numbers are telling you, and without the empathy of understanding a customer’s journey, you are basing your decisions half measures. 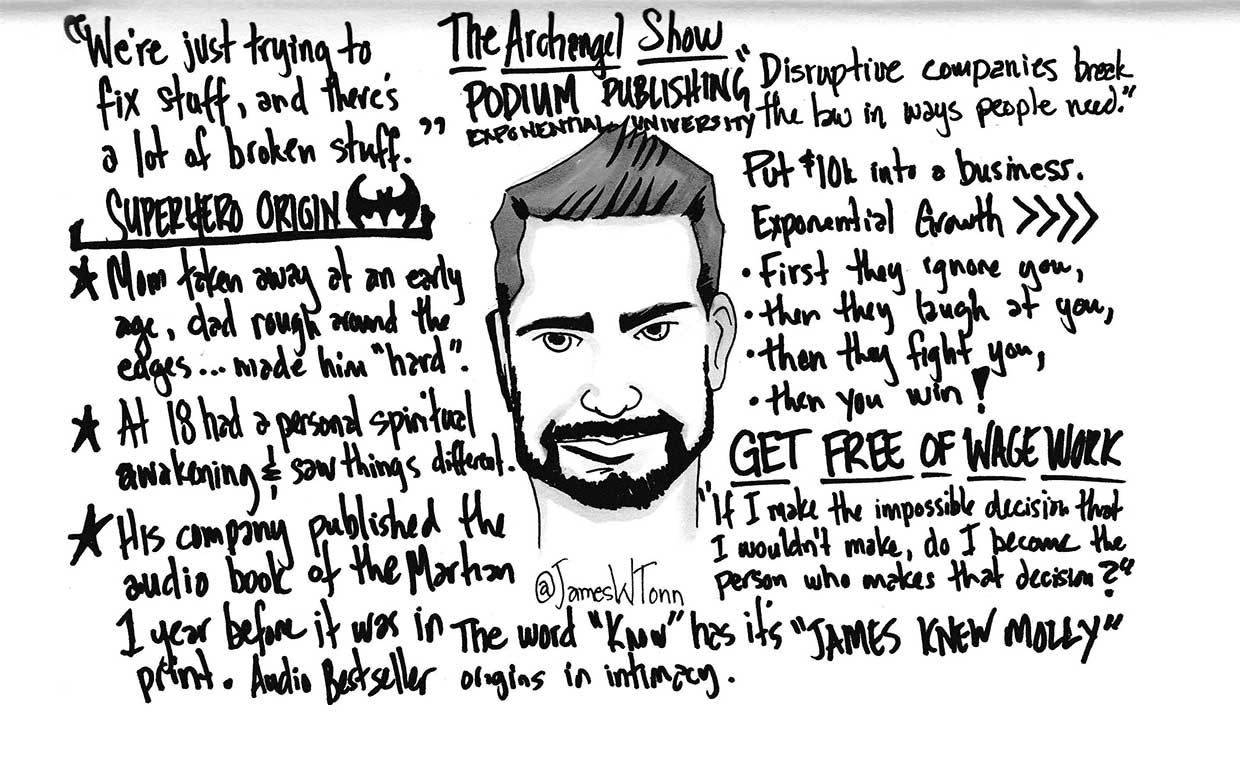 James W Tonn told his hero’s journey next. His mom was taken away from his house at an early age, his dad did the best he could but was rough around the edges, and at the age of 18 he had a personal spiritual awakening, and literally saw things differently after that moment.

When referring to his company’s exponential growth, he said: 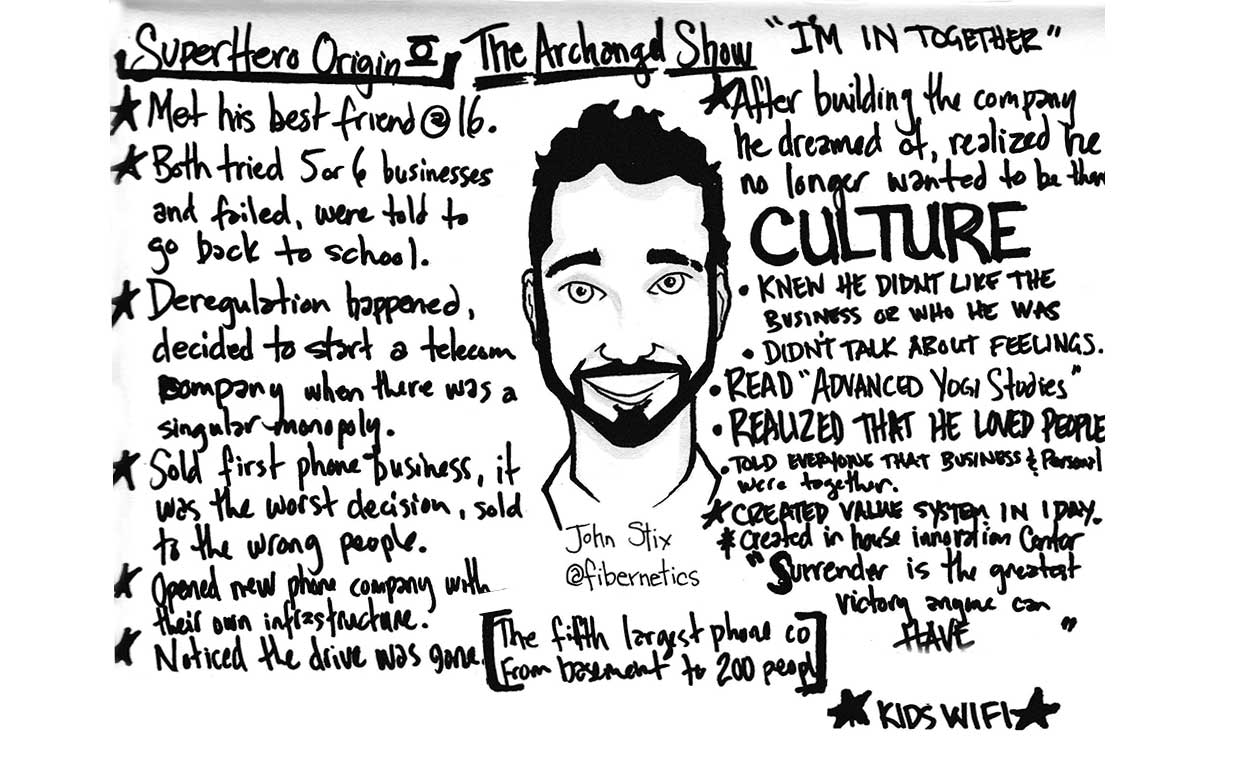 John Stix and his best friend met at 16 and had a series of business adventures before founding Fibernetics, the 5th largest phone company in Canada, together they built the company from their basement to 200 people.

He realized the value of culture, and realized that he actually loved people. He set out to work with his leadership team to create a set of values, and today has radically transformed the culture of the company. 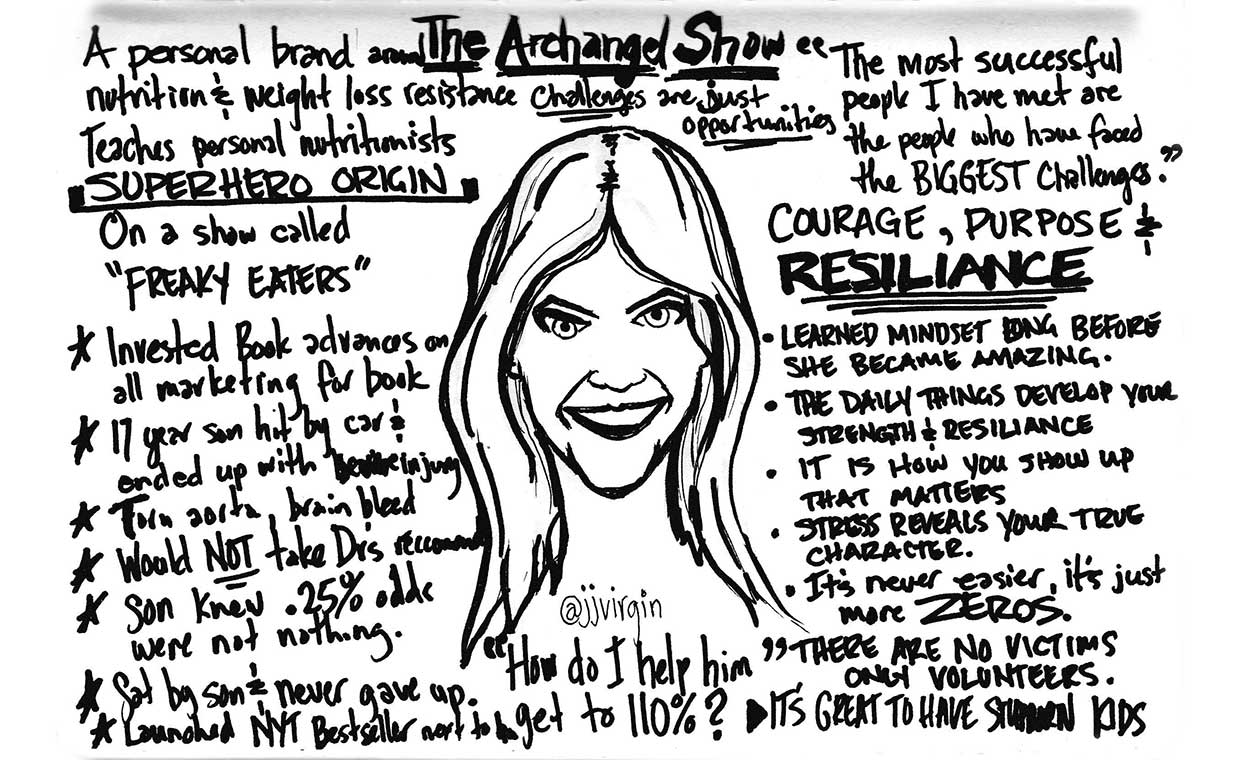 JJ Virgin spoke at the Archangel Summit, her story is a fascinating one, and really speaks to what happens when failure is absolutely not an option.

On the cusp of releasing her first book, her son was involved in an horrific hit-and-run accident. She sat by his side and never gave up, vowing to get him back to 110%. During the entire process of a constant vigil, she launched a New York Times bestseller, and launched an entire lifestyle brand.

She said the most important traits you can have are courage, purpose and resilience. Stress reveals your true character, and how you show up is what truly matters.

The event was an inspirational success, and despite the ridiculous traffic that I endured to get to Toronto on a week night, and the fact that I had to travel solo because Craig came down with a wicked gastro bug, I had a great time.