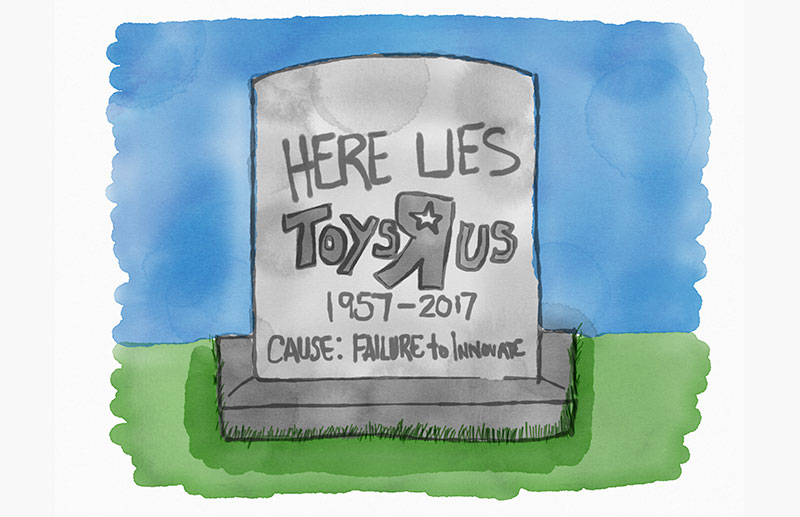 I have a confession to make.

Despite the fact that I’m a Toys R Us Kid, I’m not the least bit surprised that Toys R Us is filing for Chapter 11 bankruptcy protection.

When the first Toys R Us opened in London Ontario back in the early 90’s, I was the happiest teen in town. I’m the guy who never stopped buying toys, in front of me on the ledge of the custom wainscotting I built in my office there are a half dozen Star Wars toys, a Destiny Megablocks Figure, and three different character based USB sticks.

I love Toys R Us as a concept, but not one of those toys I just mentioned was purchased inside of a Toys R Us.

I have two kids, they love Toys R Us, but the truth is, they prefer the Wal Mart toy section, and when Target was still in Canada their toy section was better than Toys R Us by a country mile.

Today, if I want to buy something cool, I will go to a comic shop, or a dedicated gaming store, or simply visit Amazon.

What has killed Toys R Us? Well, stupid corporate greed is one thing, but their main problem is the same thing that has taken businesses that should have exploded in the internet era, and completely destroyed them.

Remember Consumers Distributing, Shoprite, Eatons, and Sears? Every one of those companies had an innovative business model that should have been able to adapt to the Internet Economy.

Consumers Distributing and Shoprite were catalogue shops that had no showroom, you went in, ordered things off a slip of paper, and made your purchases.

Eatons and Sears started out as a way for people who didn’t live near a city to get the goods they needed.

Sears stores used to be the gold standard of retail. They were one of the first stores to do away with the mandatory “checkouts at the exits”, and instead integrated checkouts throughout the store.

In the last 10 years, Sears has become a standard box configuration with no personality, and no reason to want to shop there.

Compare them with IKEA, a brand which has taken the catalogue concept to new heights. They have made their stores “destinations”, and my family makes regular pilgrimages to IKEA in Toronto multiple times a year, even though we have a pick up depot 10 minutes away from us.

Blockbuster should have been able to demolish Netflix. People don’t realize this but Blockbuster was revolutionary at the time, and led the revolution of people being able to purchase movies for a reasonable price (in the early 90’s I had a collection of video tapes including a copy of Who Framed Roger Rabbit that cost me $120 to purchase). Even though they had innovation in their DNA, I had six different Blockbuster cards because they couldn’t network their stores together in order to have a single sign on process.

Blockbuster, Radio Shack, and Eatons have all died because they stopped innovating.

They were also companies with terrible website presences. You can very easily judge a company’s ability to thrive in the internet economy by their website presence with a very simple test.

When Toys R Us opened, they were considered a “category killer”, nobody wanted to touch them. Mom and pop toy stores closed down. They were innovative with incredible displays, state of the art stock systems, and an incredible logistics and distribution system.

In 2001 they outsourced their ecommerce to Amazon. By the time they took it back, people had become accustomed to purchasing toys and baby items online from a company that wasn’t Toys R Us.

In 2006, they outsourced ecommerce to GSI, which was bought by eBay, further removing digital from their own companies DNA. In 2006, five years after the dot com bust, how many brilliant engineers, product people, and digital marketing experts do you think would have quickly jumped at the chance to be part of a brand like Toys R Us?

It wasn’t until 2015 that they finally brought their eCommerce site in-house…but visit their site, does it look like a modern website to you? By 2015 eCommerce was no longer in Toys R Us’ DNA, and you can tell.

Their stores stopped becoming destinations. They took over FAO Schwartz, but brought in none of that DNA. I was at the FAO Schwartz store in Las Vegas before it closed, and nothing has ever made me become a kid as quickly as that store. It was positively magical with an incredible two story tall wooden horse, and a life sized X-Wing.

The truth is Toys R Us is a business that has been in decline for two decades, and the past is catching up to them.  Their only hope now is to innovate or die.

It’s not too late. Toys R Us can save itself, but it needs to act fast. Here are some back of the napkin suggestions.

Toys R Us, like every other business needs to innovate or they will die.

How’s your business doing? Are you constantly innovating? Are you doing the most to nurture your prospects into customers? Are you measuring your social media presence? Are you still mindlessly shuffling towards more leads?

Get in touch with us, we want to help you out.