Inspiration from The Archangel Summit 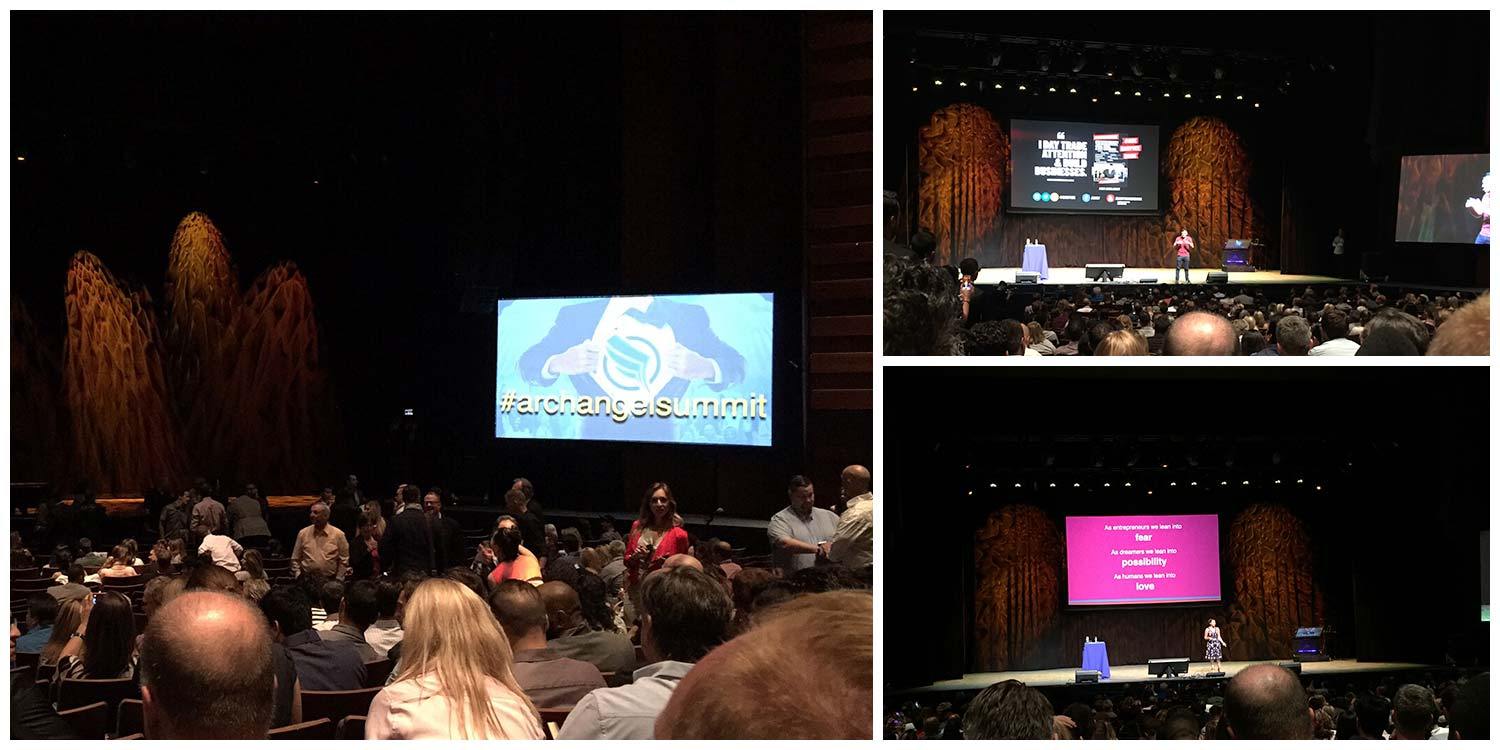 On Wednesday September 21st, we had the opportunity to attend the Archangel Summit at the Sony Centre in Toronto Ontario.  This was the first time we had heard of the Archangel group, but we were attracted to the event due to the amazing line up of guest speakers, and the promise to be added to an exclusive Facebook group, and some really cool extras.

The line up included Gary Vaynerchuk, Seth Godin, Robin Sharma, and a number of others who’s names we vaguely recognized, but didn’t know incredibly well.  The event was put together by a man named Giovanni Marsico, whom we knew nothing about, but who’s reputation seemed impressive. We ponied up for a pair of tickets and set off on the journey from London to Toronto (a mere two hour’s drive).

The first of our cool extras was an upgrade from our bargain “Balcony” seats to floor seats, while the second surprise was a copy of Gary Vee’s new book #askgaryvee.

The event was impressive, and during the first speaker’s talk, Brian started jotting down notes in SketchNote style based on learning from Mike Rohde’s SketchNote Handbook.  For those of you in the least bit interested in chronicling events, look at this book.

Brian started posting these to Twitter, and then to the exclusive Facebook group as well.  The reaction from those in attendance to the summaries was humbling and encouraging, and throughout the day he continued to post SketchNotes.  The reception to this has been amazing, and has encouraged us to write a couple of blog posts including one on “The Myth of Talent” that we will post soon.

Below are all of the sketch notes gathered together, along with some of our favourite recollections (to the best of our memory). Our order may be off, and we are missing some speakers, this much drawing back to back gets a bit exhausting.

First up was Robin Sharma – www.robinsharma.com (@robinsharma on Twitter) who gave us five maxims to lead your life.  He was an incredible first speaker and really got us off to a great, energetic start. 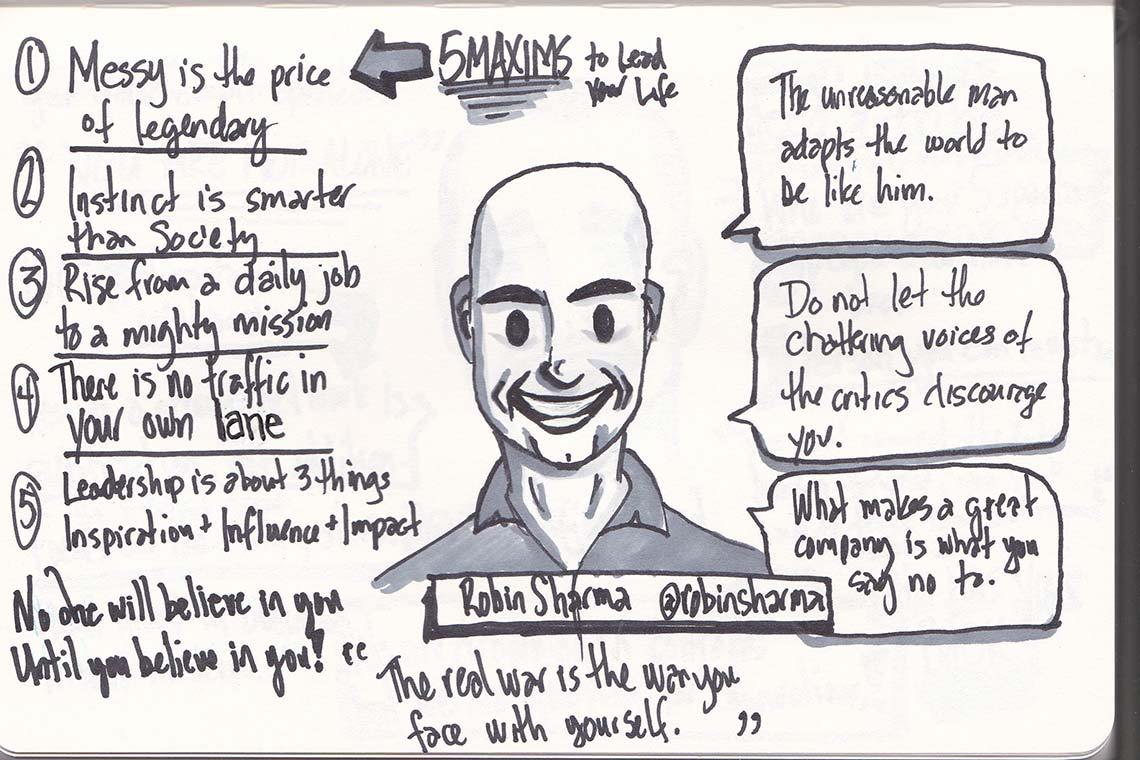 Robin Sharma at the Archangel Summit

Next up was Philip McKernan – www.philipmckernan.com (@philipmckernan) talked about One Last Talk, where he challenged us to think about what our true story is. This was a talk that really got the audience engaged, and many of us shared stories with each other.

Philip McKernan at the Archangel Summit

Gretchen Ruben – www.gretchenrubin.com (@gretchenrubin) told us about the upholders, questioners, obligers, and rebels, and how when creating new habits its important to use your nature to your advantage. If you’re an early riser, then rise early and do things when your energy is the highest, a late night owl, then work with your energy. 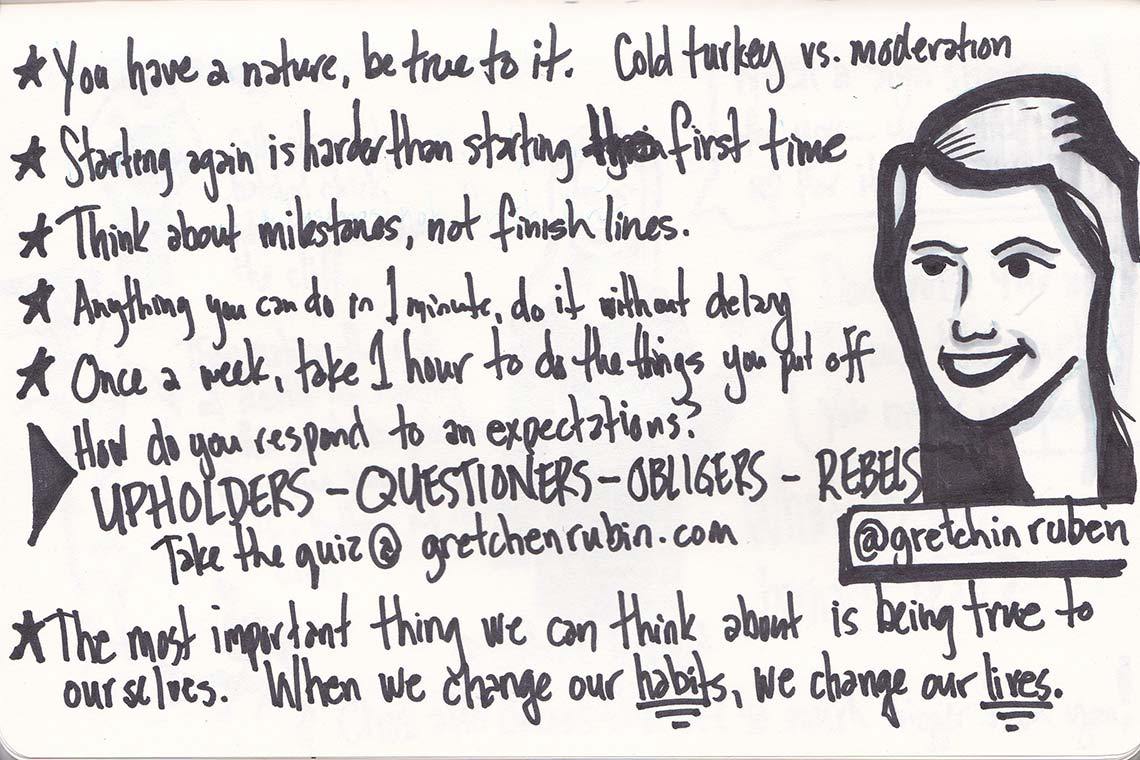 Gretchen Rubin at the Archangel Summit

Jayson Gaignard – www.mastermindtalks.com (@jaysongaignard) talked to us about needing tribes, your five spartans, and the importance of having one person who has your back above all others.  Cultivating a strong network is as much about pruning as it is about making new connections. 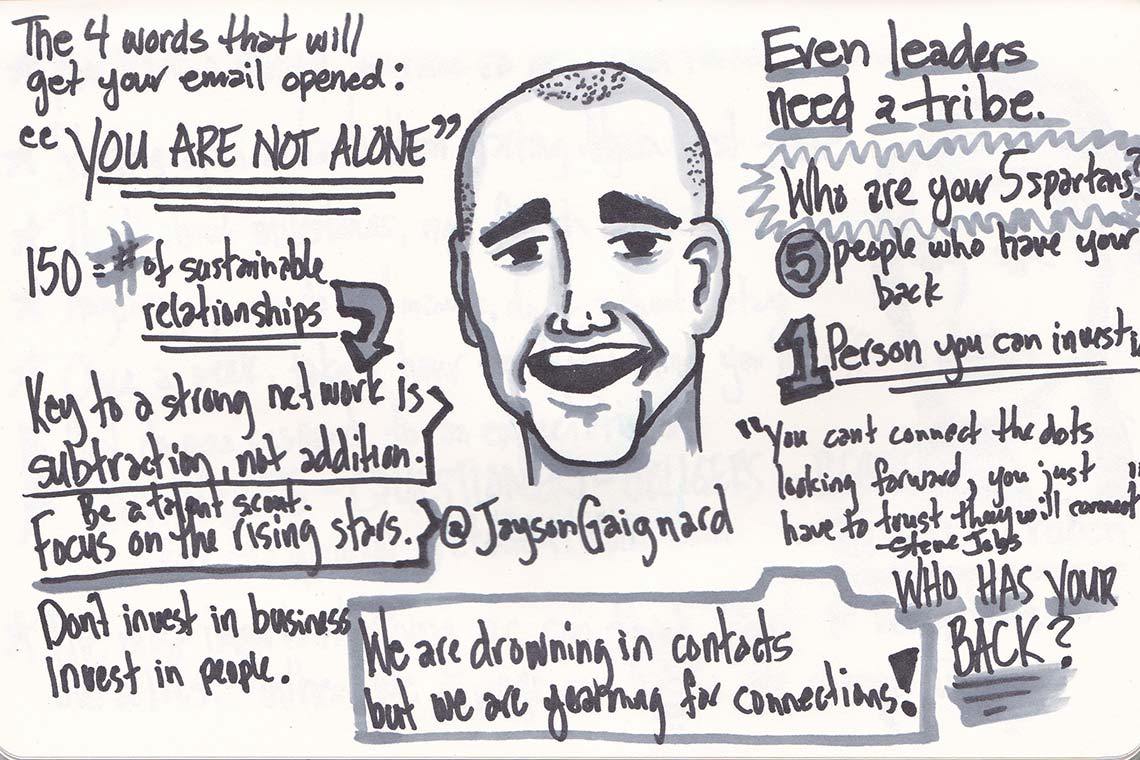 Jayson Gainard at the Archangel Summit

Natalie MacNeil – www.shetakesontheworld.com (@nataliemacneil) shared the rather horrific story of the Barnacle Goose, who encourages its newborn gosling to leap from the top of the cliff to the bottom, on wings not yet ready to fly.  Not all of them survive the horrifying tumble, but those that do will thrive in the lush environment, while the top of the cliff offers nothing but certain death.  It was a great parable about taking risks. 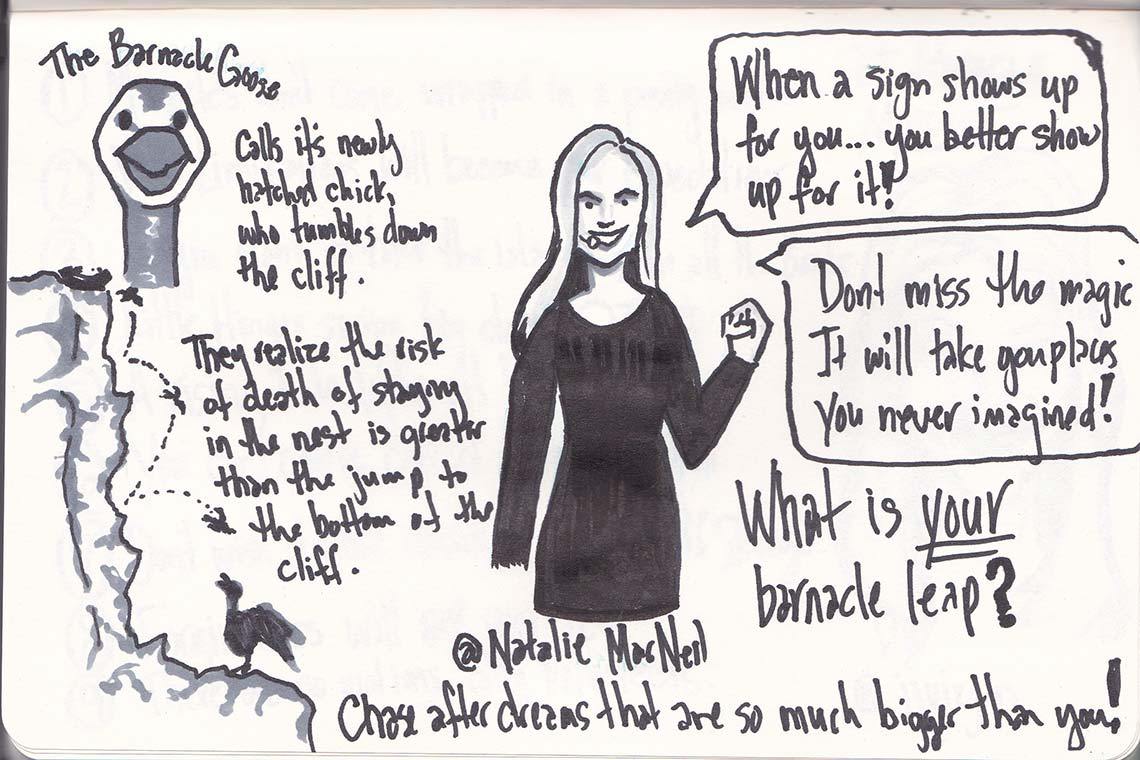 Natalie MacNiel at the Archangel Summit

Seth Godin –www.sethgodin.com (@ItsSethsBlog) gave us a rapid fire staccato of knowledge nuggets.  He had come onto the stage earlier in the day to tell people to stop using the flash on their cameras to take distance photos (Brian cops to this once, but in his defence says he didn’t realize his flash was on, and immediately turned it off).

Seth told us to dance with our fear, that Nike’s slogan should have been “MERELY do it!”, and that if you don’t have any good ideas, it means you haven’t generated enough bad ideas.  Create enough bad ideas and the good ones will follow along. 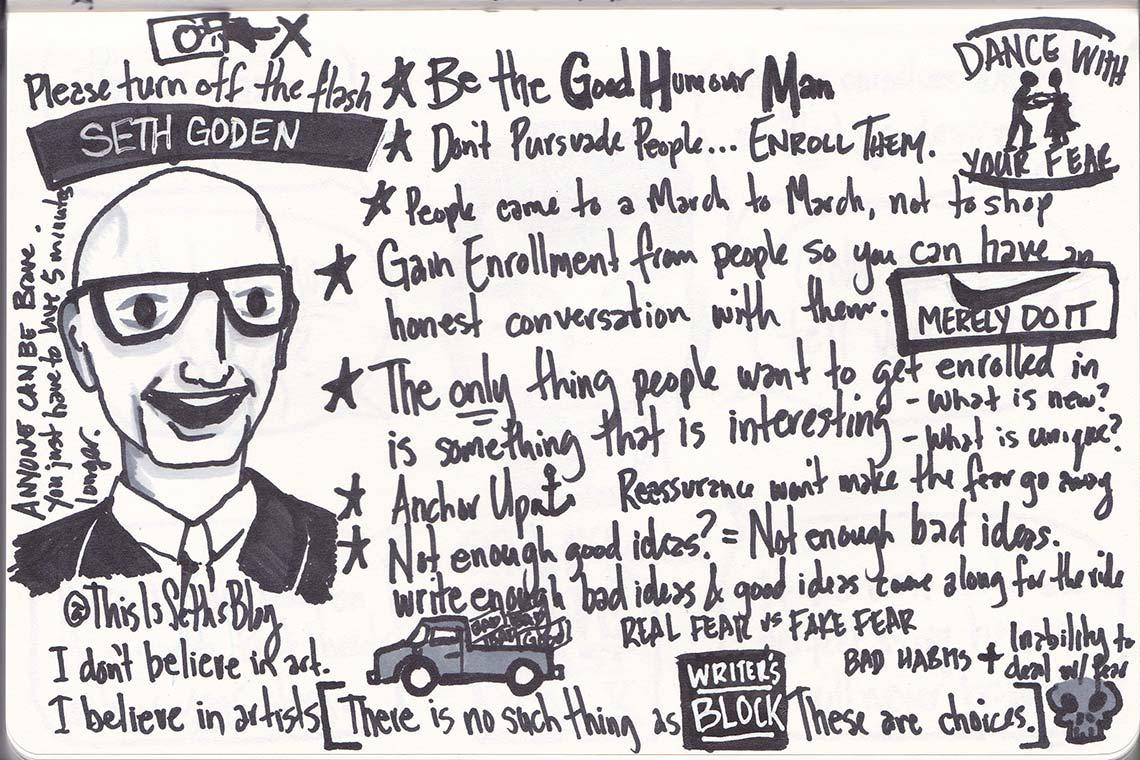 Seth Godin at the Archangel Summit

JJ Virgin – www.jjvirgin.com (@jjvirgin) shared her inspiring story of staying by her son’s side after a critical accident nearly took his life. Her story was about helping her son recover from, and in many ways cope with an entirely new life.  This is how she gained the Miracle Mindset.  She told us about the main talking points in her new book, and told us about the academy program she will be teaching around the Miracle Mindset. 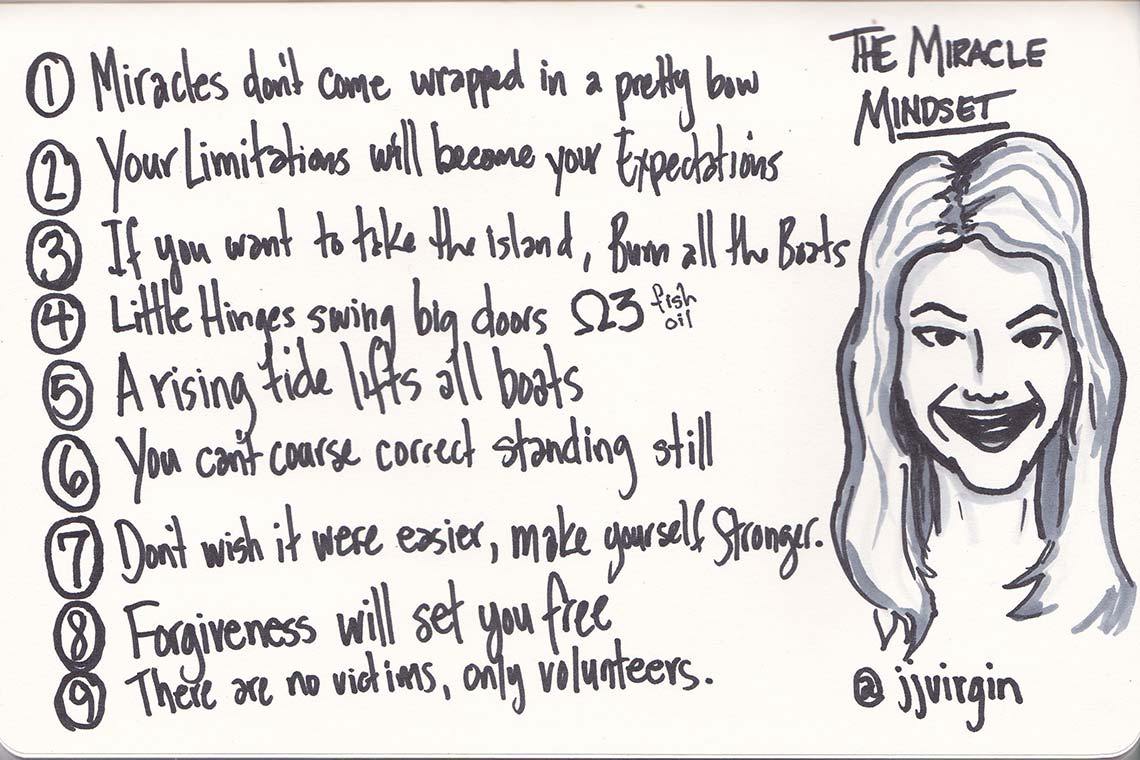 JJ Virgin at the Archangel Summit

Finally, the big man himself, Gary Vaynerchuk –www.garyvaynerchuk.com (@garyvee)  took the stage, and recapped what got him there.  In fifteen minutes, he shot more great thoughts, quotes, and ideas than most people have in a month.  Brian said it best with this quote:

“Listening to Gary Vaynerchuk is like drinking from the fire hose, it comes at you all of a sudden, you’re overwhelmed with this torrent, you’re not going to be able to breathe, you’re gonna get wet, but there is NO WAY you will be thirsty!” 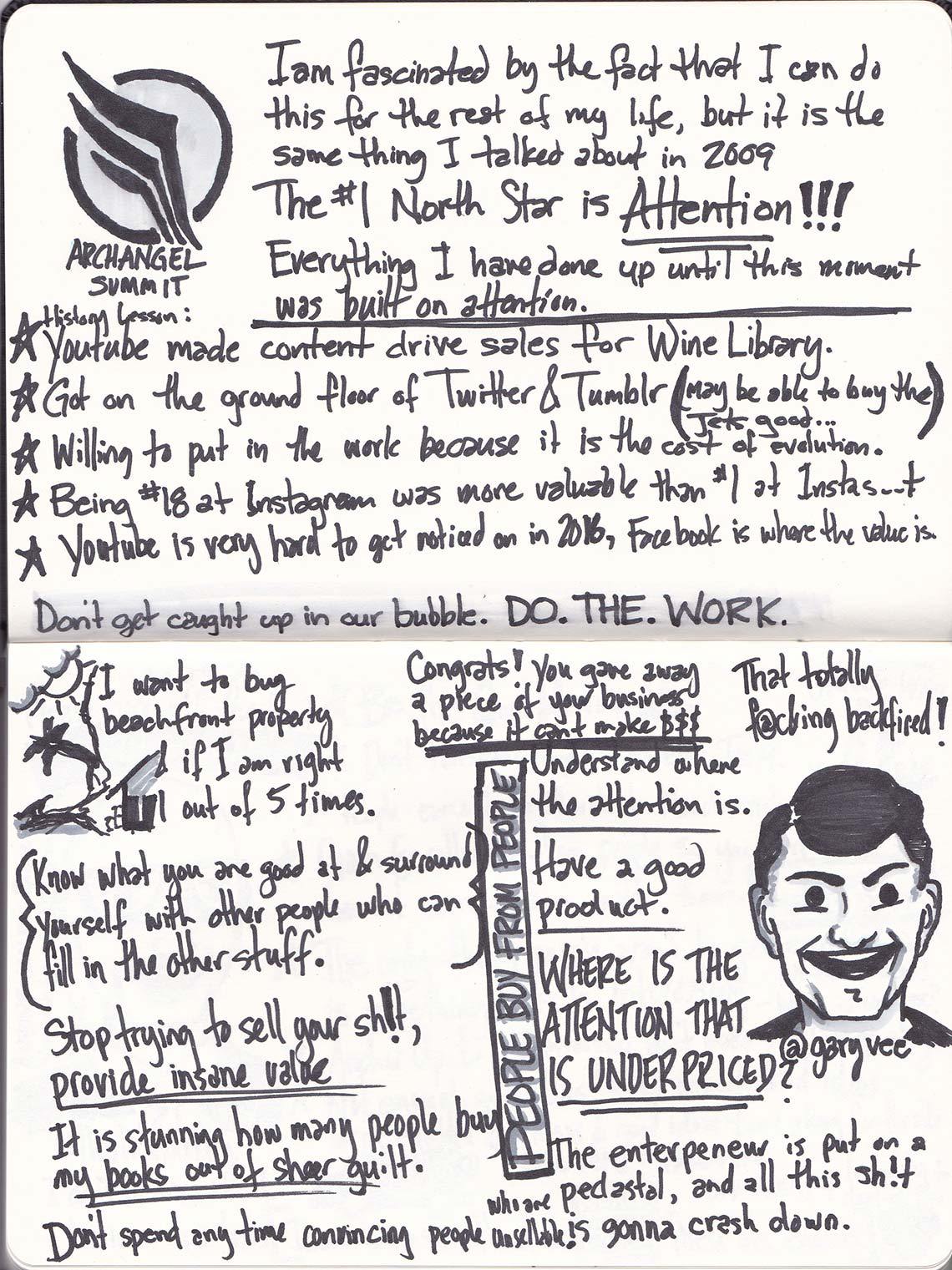 Gary Vee at the Archangel Summit

We found the Archangel Summit to be an inspiring, motivational, and aspirational gathering.  We left the summit with amazing ideas, and built plans in the car on the return to London.  Hours after we left the venue we were still vibrating with excitement and possibilities.

If you’d like to chat about our experiences at the summit, get in touch with us on Twitter @northiq or talk about SketchNoting with @briangarside.