We’re knee deep in a municipal election here in London Ontario, which falls fairly close to a recent Provincial election, and only a couple of years removed from a Federal election. Because of the fairly tight timelines of municipal elections (candidates had to declare themselves formally before the end of August, and voting takes place October 22nd), the signs are out in force.

I’ve talked to a number of people who’s opinions on this years signage varies between interest to annoyance. In my own drive, I pass by between 100 and 200 signs depending on the route I take on my 11 minute commute to the NorthIQ offices. The number varies so widely because the lesser trafficked routes tend to have fewer signs, while large public lots tend to have many more signs, and the university is virtually sign free.

I was thinking about how these signs are a very specific type of marketing, and how many of them have the same benefits, drawbacks, risks, and pitfalls of the marketing we do every day.

This is a common psychological tactic. Basically it boils down to this: By getting someone to commit to something small, they find it easier to commit to something larger. In this case, by committing to putting a sign on your lawn, you make it easier for that person to firmly decided to support the candidate. Putting a sign on your lawn is a tiny commitment, you can easily remove it, and you don’t have to do any work…you just agree to let someone put something on your lawn. The effort required is tiny. By doing this, they actually increase their psychological commitment to

Classic psychological studies have demonstrated that if you ask people to perform a simple task that they are unlikely to refuse, you can increase their chance of agreeing to a related task that requires a higher investment of time or money later. For example, asking a store owner to put a sign in a window to advertise an upcoming charity auction will increase the chances that they will later agree to donate something to that auction. Asking a patron of a museum to wear a button declaring their support for the museum will increase the likelihood that they will later give a donation to the museum.

The same is true with internet marketing. By asking for a small amount of information on your website, you make it easier to ask for more information on subsequent visits. This is a key tactic of our “3i” formula which we use at NorthIQ.

Tactic 2 – Standing out from the Crowd 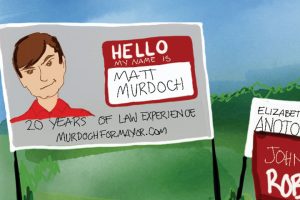 The majority of the signs this year seem to be some variation on bold, white type on purple background (Western University in London’s primary colours are Purple and White). Most candidates are steering clear of Red, Orange and Blue the primary colours of the three major federal parties. Green is also out, despite the fact that London is “The Forest City”.

Very few candidates have chosen to add pictures of themselves to their signage, and this puzzles me, after all your face is the biggest “brand identifier” in a mayoral race, and I want to know who the person I am voting for is.

One candidate for councillor in my ward has a big “Hello my name is…” sticker graphic on his sign, with a huge picture of himself on a grey background. This one stands out vividly among all of the other signs, and it always catches my eye, to the point where I know his name, and I know his face.

Photography is incredibly important in marketing, we have found that large, graphical images really catch the interest of website users. High quality photography is one of the best investments you can make, and can take an otherwise okay website and elevate it to an incredible place. Video on the web is even better. Using video on a landing page can increase conversions by as much as 86%!

People in general are easily swayed by group thinking. You see this regularly on the internet with Memes and how quickly ideas can fly around which don’t stand up to the tiniest amount of critical thinking – no, Costco is not giving away $100 gift cards to everyone who shares this status, if they did that, they would go bankrupt in a day.

Having a candidate’s name everywhere can make them look like they have a lot more support than they may in fact have. I have noticed that with this cycle there seems to be a real focus on candidates putting many signs on high traffic corners, but if we go into the neighbourhoods themselves, there are relatively few signs. Paul Cheng and Paul Paolatto have a lot of signage on major thoroughfares, but very few lawn signs in any of the neighbourhoods that I drive through regularly. Conversely, as we get closer to election day, you can start to see where candidates have canvased, and they seem to leave a trail of signs behind like a snail leaves a trail as it slowly trudges along.

Cheng and Paolatto seem to be going for the high traffic areas, but because they are putting signage on non-residential land (usually on corners with gas stations or plazas), they’re not taking advantage of the “Escalation of Commitment”.

On the internet you will see an ad for a website you’ve recently visited will follow you all around the internet. This is known as retargeting, and when used properly, it is great at getting you to revisit a website you recently were at. Personally though I hate it when Amazon retargets me for that exact same lightbulb that I bought from them yesterday on every website I go to for the next week.

One thing I’ve noticed quite a bit with this race is how few candidates have clear calls to action on their banners. A sign itself is a jump off point for an action. Hopefully I will remember your name and go home and Google it. When I do Google the name, what will come up though? Will the candidate’s website be the first position? What about those people who think that the internet is Facebook (particularly the older demographic)?

Having a clear call to action for a website is a no-brainer in this situation. Simply having a website however is no guarantee that you will have traffic to it, or that it will rank on Google. A well structured website, with a good backlinking strategy, and high volume links in every press release sent out by the candidate is the only way to ensure that the site is found on the web. There are a number of current candidates in the London municipal election who’s names show websites in positions 5-10, rather than 1-5. What that means is that others are controlling the conversation (usually large media organizations who have run stories on the candidate’s launch platform).

Doing a Google search on just the names of the candidates for mayor, this is what I discovered.

One result showed a prominent MMA fighter with the same name, another was a former mayor in South Africa, and another candidate has the same name (and may be the same person) as someone who ran for mayor of Sarnia in 2013.

Of all of the candidates who I searched, only 4 of the 14 had easily found websites. One other had a website, but it was not easily found. Of the four, three ranked in the top 3 for their own name.

Having your website show up on Google is incredibly important. 74% of buyers said that a website holds at least some influence in their decision to make a purchase. Your website is the single most effective, cheapest marketing tool that you can have.

Drafting, or slipstreaming is a racing term which allows you to conserve energy (or fuel) by tailing a leader and then slipping by them at the last possible second. We see this employed in this current race with 14 declared candidates only a handful who have prominent signage. Cheng and Paolatto have had signs up since nearly the beginning of the campaign period (May 1st). Others are beginning to display signs now. Already Cheng and Paolatto’s signs are becoming noise, and people I talked to have begun to tune them out. Worse still, some are annoyed by the number of their signs that are all over the place, and are actively talking about how much they dislike the signage.

In this case, candidates who begin to display their signs a few weeks before the election may be at an advantage because the names will be fresh in the minds of voters when they go to polls, having drafted behind Cheng and Paolatto’s signs, and suddenly sprinting past at the last moment.

This is a great tactic for marketing events, drafting on another popular event, and marketing your event as an “alternative”. There’s a very famous comic convention in San Diego which has spun off an entire cottage industry of other “off property” events that take place because of the huge amount of people in one area at one time. It might be a great experiment to post an offer near a major event in your area to see what kind of traffic you can attract.

Lawn signs are a micro example of advertising, and how you can generate traction for your own business, if you have memorable branding, a clear call to action, and you have a value proposition that gets people to give you their information, you can create an amazing Digital Experience.

If you’re interested in taking the next step in lead management, read our post “Generate More Higher Quality Leads in 3 Steps“.